The Case of the Chilly Drop Bottom Furnace 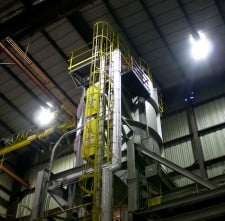 A manufacturer of large metal extrusions for the aircraft industry called ACES to the scene of a 40’ drop bottom furnace. The furnace had failed its most recent NADCAP audit because the hot junctions of the thermocouples recording the high and low limits were located between the outer shell and the inner liner. This meant that the thermocouples were actually separated from the work zone by a steel barrier, nowhere near the work zone. NADCAP regulations clearly state that the high and low thermocouples be located as close as practical to the work zone. The ACES Control Systems Investigators on the case extended both thermocouples to penetrate through the inner liner, placing them near the work zone, without incident. But when they did their tuning survey, the readings were about 20º F. too cold — well outside the +/- 10º F. limits established for this furnace.

There was a 4” vent pipe with a fan coming into the top of the furnace, but the CSIs were assured it was used only during cool down. The CSIs filled the thermal wells with Fiberfrax insulation to prevent air from being sucked in around the thermocouple and influencing the reading. When that had no effect, the CSIs investigated the recorded traces for the thermocouples — and uncovered the fact that the top one had always run cool.

The CSI team went home for the evening, stumped. Then that night the lead CSI woke up at 4:00 AM with a eureka moment: “That furnace is running under a vacuum!“

The next morning the CSI probed the vent and made an important discovery. “There’s no damper, no butterfly valve for this pipe,” said the CSI, “it’s sucking cold air in — right on top of my thermocouple.” 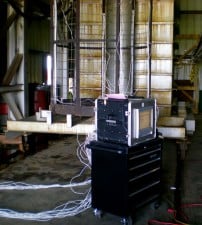 Surveying multiple points inside the furnace with the Chessel

As an experiment the CSI positioned a piece of cardboard over the fan vent, and the cardboard was sucked right up against the vent — and the temperatures immediately corrected themselves. An air-operated butterfly valve provided a more permanent solution. Now the thermocouples are correctly positioned within the furnace’s work zone — and are measuring air undisturbed by untimely cool blasts from the vent fan. The oven is now accurate within +/- 2º, better than it’s ever been.

In this case the ultimate perp was an incorrect installation by the manufacturer. The furnace had been running for years with improperly positioned thermocouples — and only when the thermocouple position was corrected did the secondary problem of the damperless vent fan reveal itself. The issue of haphazardly installed equipment is one ACES deals with on a regular basis; if you have a new — or old — piece of equipment behaving mysteriously, give us a call.