The Case of the Hot-and-Cold Oven

An aerospace customer had recently moved one of their composite ovens which they used for curing aircraft parts. When they hooked it back up again they ran into a couple of problems: First, the machine wasn’t warming up fast enough. Second, once it finally did warm up, it was overshooting the maximum temperature. The oven was so inconsistent that it wouldn’t pass a survey, and the company needed it certified ASAP. 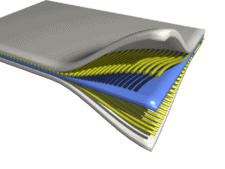 Composites are formed by combining materials together to form an overall structure with properties that differ from the sum of the individual components. (Source: Wikipedia) Image source: Wikimedia Commons user PerOX

The ACES CSI (Control Systems Inspector) reviewed the wiring diagram and examined the panel to make sure all the wires were connected. He discovered that several wires had never been connected and that the terminal landing wasn’t the same as in the drawings.

It appeared that the wires that should have been going to the return air damper were connected to the VFD for the blower. He ascertained that those wires did nothing, and so he removed them. Working through the PLC, the CSI tried to open and close all of the dampers, with no results.

He traced out the wires to the damper motors on the top of the oven and discovered that the ends of the wires to the motors were attached incorrectly. The CSI fixed the wiring and tried to open and close the dampers from the PLC, with no results.

Upon further investigation, the CSI finally ascertained that the motors had never been referenced on the dampers, so when the system fed the damper a position, the motor would just climb up the shaft and the damper wouldn’t budge, because the motor wasn’t bolted down; it was just hanging on the shaft.

Because the dampers weren’t opening and closing properly, they were sucking in too much air, causing the oven to be overly cool in some areas. Once it finally did heat up, then the dampers wouldn’t open for ventilation, and that’s why the operators had to prop open the oven door to cool it down.

After the CSI fixed the faulty wiring to the damper motors and updated the electrical drawings, he bolted down the motors so they had leverage to open and close the dampers properly. He also sped up the recirculation fan from the VFD to increase uniformity.

Now the oven dampers operate perfectly to hold heat or allow circulation as needed, and the customer no longer has to open the oven doors to cool down the interior. The machine passed certification and uniformity tests, and now aircraft parts are virtually flying through the factory.

Moving an oven means recommissioning it — a process of reconnecting dozens of wires to the control cabinet, referencing the motors and more. If you’ve moved a piece of existing machinery, installed a new one or just have an oven that runs randomly hot and cold, ACES can turn that oven into a rock-solid heating machine that will pass inspection with ease. Give us a call today.