The Case of the Lost Robot

ACES was onsite working with a customer on a project, while there, the customer mentioned a Yaskawa Motoman MH24 they were trying to get up and running.  The technician returned to ACES and had our in-house CSI team reach out to the customer. 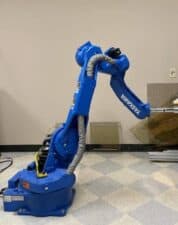 During the initial conversation on site the customer mentioned the following items of concern:

All the drifting and getting lost was a major problem, especially since the customer was trying to run a program integrating a laser into their process.  It is critical to maintain a consistent distance from the material due to the focal point of the laser.

Working with Yaskawa and a local distributor, ACES dug in.  During the investigation it was revealed that the robot had been in storage for an extended period.  How does this affect the robot?  MH24 robots have several batteries installed for memory purposes and if the robot is not connected to power these batteries can drain causing memory loss in critical locations.  We replaced the batteries and it seemed to get us a step forward. 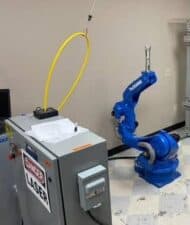 Setting up the TCP improved minimally, drifting appeared to lessen, and the robot improved returning to home position.  However, another symptom began occurring, the robot would not remain “normal” to the plain of the surface being worked on.  Documenting these improvements and additional symptoms lead us to ask more questions, is it the program?  Is the tooling surface out of square in multiple locations? Is the robot located in an optimal position?

Is it the program?  ACES reviewed the program both in pulse and relative modes.  ACES witnessed attempts of the robot to rotate excessively in the “R” axis. We made minor adjustments to the RCONF settings.  This gave us even more promising results, but they were still not enough to say the case was solved.

Is the tooling surface out of square in multiple locations?  Our customer reviewed the fixture and found opportunities to improve the holding fixture.  The fixture was causing the material to bow inward at the bottom and outward at the top.  After the adjustments were made, we believed that we had the answer to our troubles.  However, once again, it was an improvement, but the case still was not solved.

Is the robot located in an optimal position?  Through conversation with Yaskawa we determined that, even though the error was not displaying on the control, we could be reaching singularity issues.  We began to adjust the base of the robot into different positions, and as we did, we began to see more improvements.  We had updated batteries, adjusted the program, adjusted the tooling fixture, and re-located the robot position.  Each of these steps provided positive steps forward we just had a couple of minor hurdles to achieve the accuracy the customer was striving for.

The TCP, how can we remove the “jump” we were seeing in the “RX” axis?  Yaskawa provides, at a cost, an additional software MOTOCALV EG that improves the overall accuracy of several key components of the MH24 robot.  With the MOTCAL software you can calibrate the distance of each arm relative to the servo motors, improving the robot’s movement accuracy relative to its base.  During TCP setup in lieu of the standard five points you have an additional two points to increase the accuracy of the TCP.  ACES installed the software and walked through the calibration of each section of the robot.  Our results were outstanding, the customer now works with a robot capable of holding the tolerance they were striving for, ensuring the quality product for their end user.