Tracking a Day in the Life of Bob 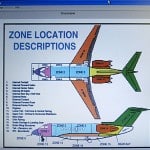 It’s Tuesday morning. Bob, a line employee at a major aircraft factory strolls up to the computer station in Zone 2 and scans his badge. The system loads all the menus and data Bob has clearance for. At a glance he can see which tasks are scheduled for the day, how long each one should take, and who’s on the line with him. Hmmm, let’s see, no alerts, everything’s running pretty smoothly, although there’s carryover work from Zone 1, as usual, and what’s this… some rework instructions from his supervisor.

Bob punches up a keyboard on the touchscreen and acknowledges that he’s read the rework order, then he clicks on a link that brings up a new schematic for the revisions. What’s going on here? Bob has a question so he presses the Help button and types a few sentences in the space provided. The system automatically routes the alert to any Zone 2, first-shift engineer on duty.

Later that morning Alan, the engineer, shows up

He and Bob walk to the station together; Alan scans his badge and taps to acknowledge Bob’s alert, and the system logs how long it took him to respond. Alan reviews the schematic with Bob and answers his questions. Alan taps the touchscreen to cancel Bob’s alert and scans himself out again.

At lunchtime Stan the supervisor scans his badge into the system and touches the All Stop button, which automatically clocks out all the operators. After lunch they individually scan themselves back into the system.

“Hey Bob, I just got an email from the system. Why are we over time on this task?” 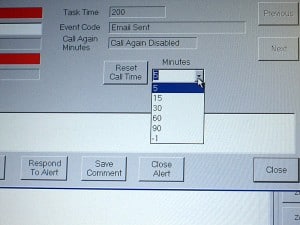 Later that afternoon Stan responds to an email alert from the system; Bob explains that they waited half the day on materials, but guesses they’ll finish the overdue task in another hour, so Stan steps up to the computer station and scans his badge, which gives him access to supervisor-level menus and options. He puts an extension on the alert, which turns off the on-screen alerts and the red light on the back of the unit for another 60 minutes, then he taps in a comment relating to the overdue materials.

At the end of the day Bob scans his badge to clock out. A box pops up on the screen prompting him to enter the percentage complete on his tasks for the day. Tonight Stan and company management will compare today’s progress to yesterday’s, and this month’s to last month’s.

Walking to the exit Bob passes the old T-card rack. He remembers not so long ago when he had to pull a T-card and carry it to a thick binder with sheets and sheets and sheets of tasks. He’s not so sure about the paperless office but the almost-paperless line is alive and well.