The Case of the Masquerading Oven 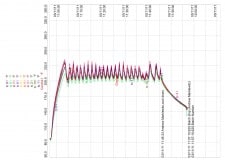 An ACES customer producing carbon fiber molding for the aircraft industry had a large oven (18′ x 10′ x 10′), which they thought was working just fine — however, they had an opportunity to land a new contract if they could prove their oven was certified for more rigorous specifications. They called ACES to perform an official Temperature Uniformity Survey (TUS) and System Accuracy Test (SAT).

The Control System Investigator on the job performed an initial SAT. He discovered a discrepancy between the controller’s settings and the oven temperature: The customer had been cranking the temperature 20-30º F on the high side in order to reach the correct internal oven temperature for their parts.

To make matters worse, a failed initial TUS revealed a temperature fluctuation of ±35º F in an oven that was rated for ±10º F.

The discrepancy between the controller settings and actual temperature readings pointed to several possible causes such as a damaged thermocouple, faulty wiring or offsets in the controller.

The failed SAT revealed the control thermocouple was out of tolerance, which was one contributor to the wide range in temperature. The CSI also noticed that the gas train was fitted with a solenoid valve, which could turn the burner only full on or full off, further impacting the temps.

After some investigation the CSI discovered that, although the thermocouple was type J, it was specified as type K in the controller. This resulted in erroneous input and drove the customer to jack up the settings in the controller to reach the desired temp.

To address the wide temperature swings, the CSI recommended trading the solenoid valve for a butterfly valve and a modulating motor to release smaller measures of gas in increments based on voltage input from the controller — not unlike installing a dimmer switch on a light bulb.

He also uncovered some thermocouple wires that were running in the same conduit as power wires, which introduced inaccuracies as voltage from the power wires contaminated the thermocouple temperature readings. 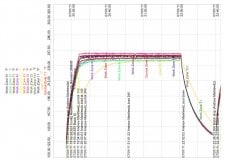 The CSI reprogrammed the controller for the existing type J thermocouples to solve the 20-30º F temperature discrepancy.

To address the multi-faceted causes of the temperature fluctuations, the CSI made several repairs: He replaced the faulty control thermocouple, traded out the solenoid valve for a butterfly valve, installed a modulating motor, and ran some new external thermocouple wires, rerouting them away from the power wires carrying voltage. In addition he installed a new high temperature limit controller.

After the repairs, upgrades and tuning the CSI performed a follow-up TSI and SAT. He was able to give the customer the documentation they needed showing an accurate oven with only ±7º F temperature fluctuation, opening the door for business expansion and new contracts for this happy customer. Now they really do have the reliable, safe and highly efficient oven they thought they had all along.